I recently listened to “Keeping at It“, which is an autobiography of Paul Volcker. Paul Volcker has served under multiple US Presidents, however his most important role was as the Federal Reserve Chairman under President Jimmy Carter and President Ronald Reagan. During his chairmanship, Volcker was faced with inflation as high as 14.8%, which was caused because President Nixon had recently abolished the gold standard. Due to this, the US Dollar was no longer backed by gold. This caused everyone in the world to convert their US Dollar holdings to gold, which flooded the market with US Dollar and brought high inflation to the US. In order to fight inflation, Paul Volcker aggressively hiked interest rates. He raised the federal funds rate to 20% in June 1981. Since these high interest rates slowed down the economic growth, Volcker was criticized and had to face opposition all the way from legislators to home builders. He stood his ground, and eventually crushed inflation. 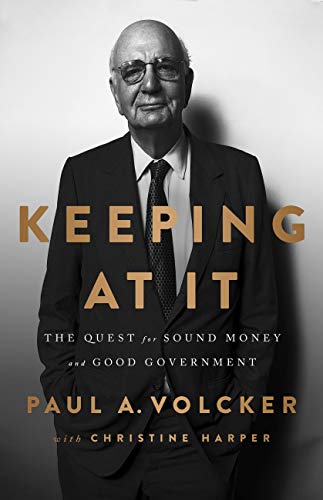 In comparison, the federal funds rate is 2.5% as of March 2019, and the market takes a nosedive even if it senses Jay Powell, current Federal Reserve Chairman, to have a hawkish tone about the economy. Since the great recession of 2008, the Federal Reserve has injected $3.9 trillion into the US Economy. I believe that we will eventually see higher inflation due to this money creation. Can you imagine living through an environment where the federal funds rate is 20%?

This book begins with Paul Volcker’s childhood days, when his father was the municipal manager of Teaneck, NJ. Paul Volcker claims that he found his model for competent and ethical governance from his dad’s leadership. Volcker talks about his days in college, and his time in London. He talks about the multiple positions he had held in the private sector, and the government sector. He discusses the chaos that happened when Nixon lifted the gold standard, how the interest rate hikes could not curtail inflation for the longest time, and how he interacted with various politicians, bankers, and financiers. Throughout this book, you will notice Volcker’s dedication to absolute integrity and his “three verities” – stable price, sound finance, and good government. This book gives you a brief overview of how the US economy has evolved and all the major events that took place between World War 2 and 2018.

I have become Paul Volcker’s fan simply because of his integrity and his leadership. In the book, he talks about how with the rising inflation, unemployment was rising as well. With the unemployment high, it was not the best time to raise interest rates. So, Volcker had to decide how he wanted to tackle this problem. If he dropped interest rates, unemployment might have decreased, but inflation would have shot up. With one of his “three verities” being price stability, he chose to fight inflation. He hiked interest rates, which lead to even higher unemployment. As the unemployment increased, Volcker came under attack from all kinds of people. However, Volcker stayed true to his principles. Inflation eventually dropped to under 4%.

Overall, I thought this 10 hour audiobook was worth the listen. I learned a lot, and now I know why investors like Ray Dalio regard Paul Volcker so highly. I would recommend this book to anyone who wants to know about major economic events that have shaped the US economy, and brought it to where it is today.

Hope you learned a little and found this blog post helpful. We talked about “Keeping at It: The Quest for Sound Money and Good Government”, an autobiography by Paul Volcker. Paul Volcker takes us through his journey in life from World War 2 to 2018. As always, you can sign up for our mailing list here.  Like us on our Facebook page here. Thank you!

Superior North LLC’s content is for educational purposes only. The calculators, videos, recommendations, and general investment ideas are not to be actioned with real money. Contact a professional and certified financial advisor before making any financial decisions.