You can think of dividends as a portion of a company’s profits that is paid out to shareholders at regular intervals. So, when a company decides to pay a dividend, it is literally sending you money for holding onto its shares. When analyzing any company’s dividends, there are 2 ratios that you need to pay attention to : Dividend Yield and Payout Ratio. Dividend yield, expressed as a percentage, is the ratio of a company’s annual dividend compared to its share price. A higher dividend yield means that you are going to get a fatter dividend check for the invested amount. For example, at the current stock price as of 09/27/19, Royal Dutch Shell (RDS-B) has a dividend yield of 6.38%, and Chevron Corporation (CVX) has a dividend yield of 3.69%. This means that for your invested capital (shares), you are going to get more in return from Shell than from Chevron. As you can see from the formula below, the stock price and dividend yield are inversely related. In other words, as the the stock price goes down, the dividend yield goes up. Hence, the dividend yield becomes more attractive when stock price is declining.

Payout Ratio shows the proportion of earnings paid out as dividends to shareholders, usually expressed as a percentage of a company’s earnings. The formula below shows how the dividend payout ratio is calculated. This ratio is important because it gives you an idea whether such dividend payments would be feasible in the future. You never want the payout ratio to be above 100% as it means that the company probably had to take out debt in order to pay dividends. You want the dividends to be paid out from the net income (profits).

Let’s look at the payout ratios for Disney (DIS) and General Electric (GE) for the past 10 years. Notice the Net Income, Dividends, and Payout Ratio % lines for Disney and GE – shown in the 2 pictures below. The payout ratio for Disney has been very consistent for the past 10 years. However, the payout ratio for GE has gone haywire after 2015. Notice that GE is paying dividends even after the net income turned negative. This means that there is no way GE’s dividend payments are feasible in the long run. Ideally, you want to invest in a company like Disney, which has increasing net income, increasing dividends, and a stable payout ratio over the years. 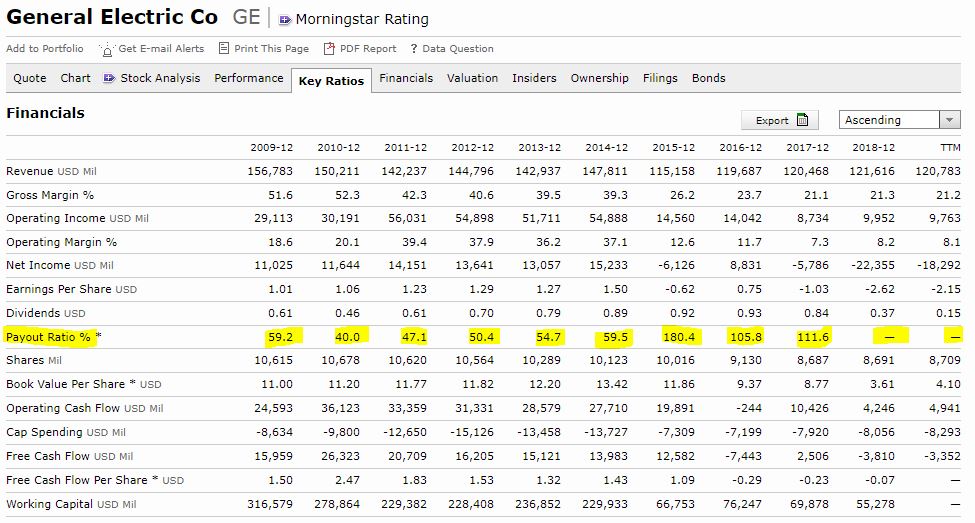 When a company buys back its shares, it is decreasing the number of owners of that company. For example, assume that 1 cake is cut up into 50 pieces, and those 50 pieces are claimed by 50 individuals. In other words, each individual has 1 piece for himself. During a buyback, the company is buying back the ownership rights of these cake pieces from the individuals, who are willing to sell their position. Let’s say the company bought back the rights to 30 pieces. Now, there are only 20 individuals who claim ownership to pieces of that cake. Since a public company can not own itself, you can think of the buyback situation as re-cutting the cake into 20 pieces (number of owners). Although each individual is still getting only 1 piece of the cake, that 1/20th piece of the cake is larger than the initial 1/50th piece of the cake. In other words, an individual’s ownership in a company grows after buybacks (usually). Lastly, now that you own a bigger chunk of the cake, the price of that piece goes up as well.

Contrary to buybacks, a company could issue more shares and dilute the ownership of its existing shareholders. For example, the shares outstanding (image below) of Tesla have increased steadily over the past 10 years. Ideally, you want to invest in a company that has had a steady decrease in its outstanding shares. 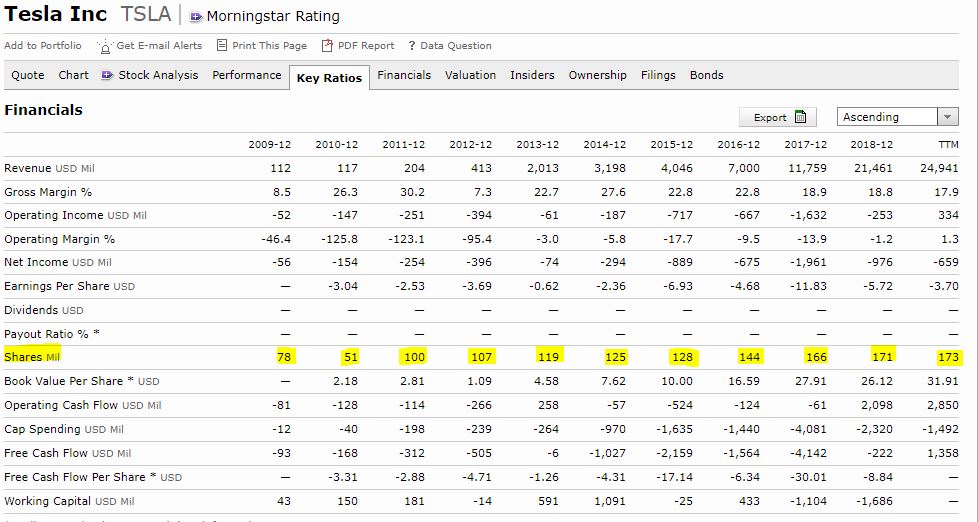 Hope you learned a little and found this blog post helpful. We talked about dividends and buybacks. We looked at various companies such as Shell, Chevron, Disney, General Electric, and Tesla as examples. We also learned about dividend payout ratio and divided yield. As always, you can sign up for our mailing list here.  Like us on our Facebook page here. Thank you!